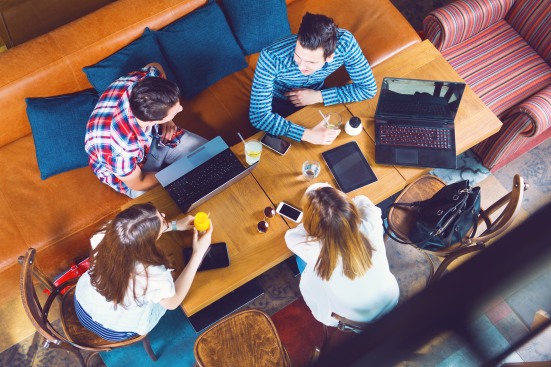 The 80 million millennials have a bad rap for being indecisive, but millennials are not indecisive—they simply take their time when making purchases. In order to make the perfect decision, they will crowd-source purchasing decisions waiting for a social response. Millennials went as far to report that until they read user-generated reviews or engaged with user-generated content from someone who is not in their network, they would hold off on making purchases. 1

In the United States today, millennials pocket nearly $1.3 trillion in discretionary spending power. 2   A recent study by the McCarthy Group found that 84% of millennials do not trust traditional advertising nor do they like it. 3 Millennials trust their closest friends and user generated content the most and advertising and sales people the least. 4 While traditional marketing is important, it is even more important to pay attention to what is getting millennials’ attention, and capitalize on it.

We are not saying to forgo traditional marketing—it is important to reach a variety of demographics and to stay competitive within the industry. But it is time to change marketing strategy. The key to winning the digital native’s trust is to find a way to involve them and make them feel like they are a part of your strategy.

When creating this strategy it is important to have a campaign that:

Transfers easily onto different mediums. Having a campaign that transfers to different mediums will not only make your job as a marketer easier, but the campaign will be more effective. For example, launch a t-shirt design contest. Students can vote on Facebook, Instagram, and in-store.

Reaches students effectively. Do research on the students on your campus. What social sites are they using the most? If students on your campus use Tumblr more than Twitter but you only advertise on Facebook and Twitter, it may be time to get a Tumblr. A study by the McCarthy group states, nearly half (47%) of respondents cited the Internet as one thing they could not live without. Students are on the internet just waiting for ways to be more involved.5